Dirk Steadfast is one of the heroes that Sir Dan meets in the Hall of Heroes.

Not much is known about Dirk's early life. At some point he forged his Magic Sword and used it to chase away the Jabberwocky from Gallowmere. He was a contemporary of Karl Sturnguard and the two were friends despite their differences. Dirk is indirectly responsible for Karl's death, as Karl started choking on a sausage after Dirk started explaining his views on the Gold Shield.

He gives Sir Dan the Magic Sword in their first encounter, and in their second, Dirk gives Dan one of the nine Life Bottles.

He was a fearsome opponent in battle, mostly because of his trusty Magic Sword and kept a firm belief that 'only women defend themselves, real men are always on the attack'.

A statue of Dirk Steadfast as seen in MediEvil 2. 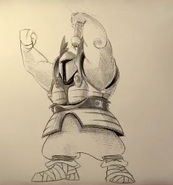 Retrieved from "https://gallowmere.fandom.com/wiki/Dirk_Steadfast?oldid=34594"
Community content is available under CC-BY-SA unless otherwise noted.