The Demonettes are demon sisters that reside in the Enchanted Earth. They play chess on a large chess board but neither of them ever wins as someone always flips the board.[1]

The Demonettes, just like the Guardians of the Graveyard, share the same health bar, so they can't be brought down separately. They have an enormous amount of health (1700) and deal considerable damage. Some of their attacks are hard to dodge due to the unstable platform. As they are in the air at all times, it's impossible to attack them with melee weapons.

It's recommended to bring either the Axe or the Flaming Longbow to the battle, preferably the latter, as it deals damage over time. The player must be careful of where they are, as the chess-like platform they are on will tip over. The safest strategy is to wait until one of the Demonettes stops to unleash her attack, then counterattack with the Flaming Longbow, and repeat until they are beaten. 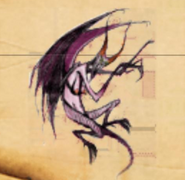 Retrieved from "https://gallowmere.fandom.com/wiki/Demonettes?oldid=33874"
Community content is available under CC-BY-SA unless otherwise noted.