Witch of the Forest (MediEvil)

The Chicken Drumstick is a special weapon that appears in all MediEvil games.

After collecting seven pieces of Amber for the Witch of the Forest from the Ant Caves, the witch rewards Daniel with the drumsticks. They're capable of turning enemies (except for Nellie Mad and all bosses) into Roast Chicken, which can be eaten to heal 20 health points. A single chicken drumstick can turn four enemies into roast chicken at most.

In MediEvil: Resurrection, the Chicken Drumstick is found in Dan's Crypt, after Dan gains the Dragon Armour and traverses through the lava. It otherwise serves the same purpose as before. 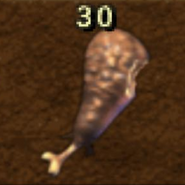 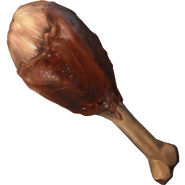 The Drumstick in the PS4 remake.
Add a photo to this gallery

Retrieved from "https://gallowmere.fandom.com/wiki/Chicken_Drumstick?oldid=35246"
Community content is available under CC-BY-SA unless otherwise noted.