The Captive Farmers are inhabitants of Gallowmere and good souls that Sir Daniel Fortesque has to save in the Haunted Ruins.

Three farmers are found in the Haunted Ruins of Castle Peregrin, captured by the Shadow Demons, tied up and hung on a wall above fires. As soon as Dan gets past the castle's wall, the three Shadow Demons will immediately dash towards the pressure plate to burn the farmers alive. After killing the Demons, Dan must put out the fires with either his club or hammer. Then he must stand on the pressure plate to free them and open the surrounding doors. If Dan goes out the castle entrance the farmers will be standing there and will reward Dan with 300 gold coins. 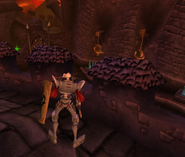