Timberly[1] (born Kimberly), better known as Canny Tim, is the first hero Dan meets in the Hall of Heroes and his former second in command. Tim appears in MediEvil, MediEvil: Resurrection, the 2019 remake of MediEvil and MediEvil: Fate's Arrow.

In 1285, King Peregrin held the 49th Gallowmere Games, an annual contest where the most skilled warriors from the land would compete for top honors. This was the year Canny Tim entered the competition and won top prizes in all the archery categories of the event. The king was so impressed, he made Canny Tim a marksman of a crossbowman part of the cavalry led by Sir Dan, as well as Dan's second in command.[1]

A year later, Tim killed Zarok's champion, Lord Kardok, in the Battle of Gallowmere by shooting him in the eye from a thousand yards away, thus earning a place in the Hall of Heroes after death.

After collecting a Chalice of Souls, Daniel can speak to Canny Tim, who tells Dan about killing Lord Kardok (which of course angers Dan, as he was killed by an arrow as well) and offers him the crossbow as aid after quickly taking back the remark. Once Dan collects another Chalice, Tim gives him a Life Bottle without knowledge of its actual use. In MediEvil: Resurrection, Tim never gives Dan a Life Bottle, instead giving Dan the Hero's Crossbow after collecting seven chalices.

In 1286, Canny Tim aids the undead Sir Dan in thwarting Zarok's attempt at conquering Gallowmere through the living Dan's incompetence. Tim procures Dirk Steadfast's Magic Sword for Dan to help slay the Jabberwocky attacking King Peregrin's Castle and later helps Dan fight off an attack by Zarok. Tim also reveals that she is female, cross-dressing in order to be allowed into the king's army.

According to Jason Wilson, the Heroes were designed very quickly for MediEvil with some of them being based on the original team members.[2] It is unknown if Canny Tim was based on a team member or not. In a Q&A about the MediEvil: Fate's Arrow comic, Chris Sorrell explained his reasoning for reconceptualising Canny Tim as a female character:

Canny Tim in a cutscene.

Canny Tim with his crossbow. 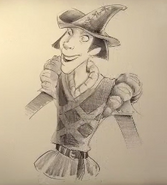 ^[a] Tim's death is only mentioned in HISTORY OF GALLOWMERE - Volume 4, which ascribes Sir Dan's actual death to Tim. It is unknown whether it is only the nature of Tim's death that is a fabrication or if Tim's death is fabricated altogether.

Retrieved from "https://gallowmere.fandom.com/wiki/Canny_Tim?oldid=35119"
Community content is available under CC-BY-SA unless otherwise noted.