The Sleeping Village, The Time Device

The Boiler Guards are part of Zarok's army, so named because they are essentially living kettle boilers. They are renowned for their dutiful (and somewhat sheep-like) devotion.

Boiler Guards possess unmatched skill with ranged weapons, especially blunderbusses and bows. They have an extra-nasty surprise for close-in attackers, spewing flames from their bellies and lighting the would-be assailant ablaze.

While the use of the Broad Sword in MediEvil suffices to vanquish the enemy, in MediEvil: Resurrection, because the Boiler Guards are capable to deal flame damage at close-quarters, it is advised to enter in retain mode (hold R) and circle around the enemy in order to avoid being hit by incoming shots, whist retaliating with a ranged weapon, such as the Crossbow.

Boiler Guards in a cutscene. 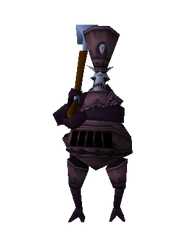 Retrieved from "https://gallowmere.fandom.com/wiki/Boiler_Guards?oldid=33315"
Community content is available under CC-BY-SA unless otherwise noted.