Bloodmonath Skull Cleaver is a hero from MediEvil and MediEvil: Resurrection.

Born a humble peasant to one of the nomadic tribes from the Eastlands, Bloodmonath Skull Cleaver gathered an army of horsemen and swept over half the civilized world. When he finally died (attempting a single handed attack on a garrison in the North while armed only with the spike on his helmet) he was the richest and most powerful peasant of his day.

He speaks derogatorily of Dan and accuses him of "constantly rearranging the castle guard and playing croquet with the king" while he constantly had the slain strewn around him. Once Fortesque accepts his Axe, he exclaims "Drink deep in demon blood my proud beauty..." to it as a fond farewell. 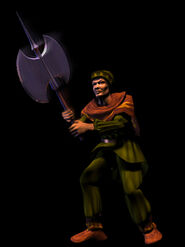 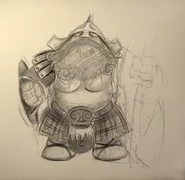 Retrieved from "https://gallowmere.fandom.com/wiki/Bloodmonath_Skull_Cleaver?oldid=34022"
Community content is available under CC-BY-SA unless otherwise noted.