The Armoured Knights are unfriendly undead who inhabit the Pools of the Ancient Dead.

These impenetrable rusty, creaky Armoured Knights won't actually attack you, but they will try to shove you into the murky marsh below. Don't get too close and use your Hammer's shockwave to push them into the drink. This is the only way to kill them, as your weapons are not strong enough against their armour. If you're feeling really lucky, you can use your Daring Dash to ram them off the paths too, but that's a risky proposition, as you're likely to fall in right along with them.[1]

Sketch of the Armoured Knight's movements. 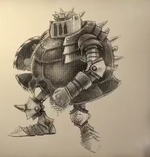 An Armoured Knight near the Chalice of Souls from the original MediEvil.

As seen in the Town House in MediEvil 2.

Retrieved from "https://gallowmere.fandom.com/wiki/Armoured_Knights?oldid=34407"
Community content is available under CC-BY-SA unless otherwise noted.